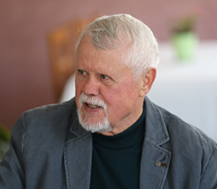 Last week we received the very sad news that one of EUROCALL's founder members, Dieter Wolff, has passed away. Bernd Rüschoff, former EUROCALL President and also a founding member of our association, contacted us to let us know. Here is what Bernd shared with us:

"Dieter Wolff was a great friend, colleague and mentor for a number of us in the CALL community and beyond. He was part of our original “band of colleagues”, who in the 1980’s started the series of academic workshops, meetings, and CALL conferences that ultimately led to the founding of EUROCALL, in which he was key. He subsequently also served on the EUROCALL executive and contributed to many EUROCALL initiated projects. His role is so nicely documented in Graham Davies’ rapport of the history of EUROCALL, available on the EUROCALL website.”

Our thoughts are with Dieter's family and friends and we would like to join Bernd in saying "Rest in peace, dear friend!".

We will celebrate Dieter's life at this year's EUROCALL conference.

Mirjam (on behalf of the EUROCALL Executive Committee)